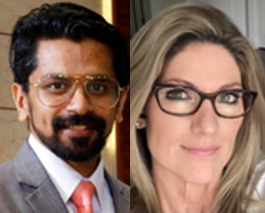 by Mathew Abraham and Karla Beehler on November 10, 2021

In this case study, we’re going to take a look at how we reconciled financial reporting between our company’s existing SAP system and the SAP system of a company we acquired.

In 2016, our company, the oil and energy firm Schlumberger, acquired Cameron International. As part of the deal, Cameron’s business units needed to be integrated into Schlumberger’s operating structure. With a strong focus on the customer and regional dynamics, Schlumberger currently organizes its operations into “basins,” which provide oversight for smaller geographical units (called GeoUnits in the Schlumberger world), identifying opportunities for growth and delivering basin-specific performance innovation. One of the key challenges faced after the acquisition was how to align Cameron’s financial statements and management reporting with that of Schlumberger, specifically providing visibility at various Schlumberger-managed GeoUnits.

In simple terms, a GeoUnit is a geographical area where Schlumberger does business. It may consist of a country, a part of a country, or multiple countries, forming a region where business goals and practices are very similar. It represents the physical location where the product or service was consumed or installed, and not necessarily where a product is shipped.

Back in 2016 when the acquisition of the Cameron group took place, the expectation was that the Cameron business operations and supporting SAP ECC 6.0 system were to align all reporting views with the parent company very quickly. Both the business and IT were put to the test in meeting this organizational and reporting requirement, which is dynamic in nature (more on that to follow). The acquired SAP ECC system was not configured to capture the data necessary for this geographic view and, as configured, could not meet Schlumberger's geographic organizational needs.

As a perfect example of the dynamic nature, when acquiring Cameron, Schlumberger had a detailed hierarchy for the geographic reporting with subdivisions of countries (notably in the United States and Canada, down to sub-city levels) with further segregation to identify the ultimate installation or consumption by land versus water. For example, an item shipped to Louisiana but installed in the Gulf of Mexico was reported as the Gulf of Mexico GeoUnit. At that time in 2016, there were 145 GeoUnits and over 1400 sub-level units.

When the geographic reporting requirement was first introduced to Cameron, the Cameron SAP ECC system and SAP Business Planning and Consolidation (BPC) reporting were designed to support divisional reporting and not geography. The design had only 15 profit centers, which represent each of the business lines in the group. One consideration management had in 2016 was to create profit centers in Cameron’s SAP system for each of the sub-level geographic locations. However, one can imagine the significant system changes, conversions, and downstream impact of changing a live SAP system supporting 50+ countries with 15 profit centers to over 1400 new profit centers that get assigned based on the geography of the sale and resources used to support those sales.

This unique challenge was presented to our team, consisting of Mathew Abraham (IT SAP Finance manager), Karla Beehler (Senior SAP Solution Architect), Raghu Modi (SAP BPC Lead) and Ravi Patel (SAP BPC Senior Analyst). Our objective was to arrive at a cost-effective, quickly delivered, and flexible IT solution that could systematically generate an entire profit and loss statement by geographical unit. The essential task was to create a set of automated new financial statements that would fully align with Schlumberger's geographical approach and allow the organization to look at the financials in a consistent, consolidated manner across all divisions.

The core requirement for Schlumberger was to capture geographic information on customer sales bookings, backlog, margin, and, more importantly, provide entire profit and loss financial statements for the GeoUnits. Considering the GeoUnit is based on the location where the product and/or service is physically consumed or installed, for services, this is straightforward to achieve since we know where we are physically performing the service. However, it is more challenging for products because the actual consumption/installation site may not be the location where we shipped the product, and may not even be the same geography as the selling organization. For example, Cameron could be recording a sales order through a Canadian legal entity, but the GeoUnit where the product will be installed may be GeoUnit A-P-G (Australia, Papua New Guinea, and New Zealand). This is particularly common for large engineer-to-order projects such as Subsea equipment contracts. Similarly, apart from the margin, a GeoUnit representation must also be applied to the other cost categories on the P&L (e.g., variances, unabsorbed production labor, SG&A, etc.).

Building this entire solution in the core SAP ERP system would have required a major restructuring of the system design and significant IT efforts, hardware upgrades, time, and money to address the gaps. The unique manufacturing scenarios in the Cameron SAP system and the nature of its business transactions made it challenging to adopt the Schlumberger reporting requirements without technically dismantling the current design. We would have needed to create the new profit centers, which would need conversion of in-process WBS and sales and service orders to be assigned with the new profit centers. We would also need to size up memory on servers to account for the substantial increase in data, consider downstream performance optimizations issues, and hire dozens of dedicated project team members to meet this deliverable. The costs to implement this reporting solution were estimated to exceed 10 million USD, which posed a challenge with the leadership on approving such a significant IT investment.

The team considered the following solutions with the above objectives and limitations in mind:

The decision was to use solution #2, the CO-PA & SAP BPC model, with the primary pros and cons noted by the team and listed below.

We identified only one con:

The focus and approach of the project was broken into two phases. For the project's first phase, the scope was to ensure that the lowest level GeoUnit data was captured on all sales, projects, and COGS postings at a transaction level. The second phase was to leverage SAP BPC to report and arrive at a full P&L by GeoUnits/geography using the combination of the CO-PA data and the business rules for costs outside of the margin.

This unique approach to leverage CO-PA data from SAP ECC into SAP BPC was the basis for GeoUnit/Geography reporting. However, where applicable, the FI general ledger was also referred to, especially to report taxes and non-operating income before tax, sales and general admin expenses, shared costs, depreciation, and amortization by geography. Other incomes and variances as part of the cost of goods sold were derived based on the plants assigned to the country. Remaining cost categories such as consumption variances and labor expenses on projects were derived through the destination districts tagged to the projects. Finally, for compensation expenses, geography was based on the country of assignment on the payroll data. Such customized logic to allocate balances to a geography was possible leveraging the flexibility that SAP BPC offers. As we know, CO-PA is not well suited to perform complex allocations, but with SAP BPC, we were able to leverage the granularity of the data captured in CO-PA and meet the gaps where CO-PA data did not contain the required characteristics for the geography allocation.

In summary, the below process flow shows the overall technical approach. 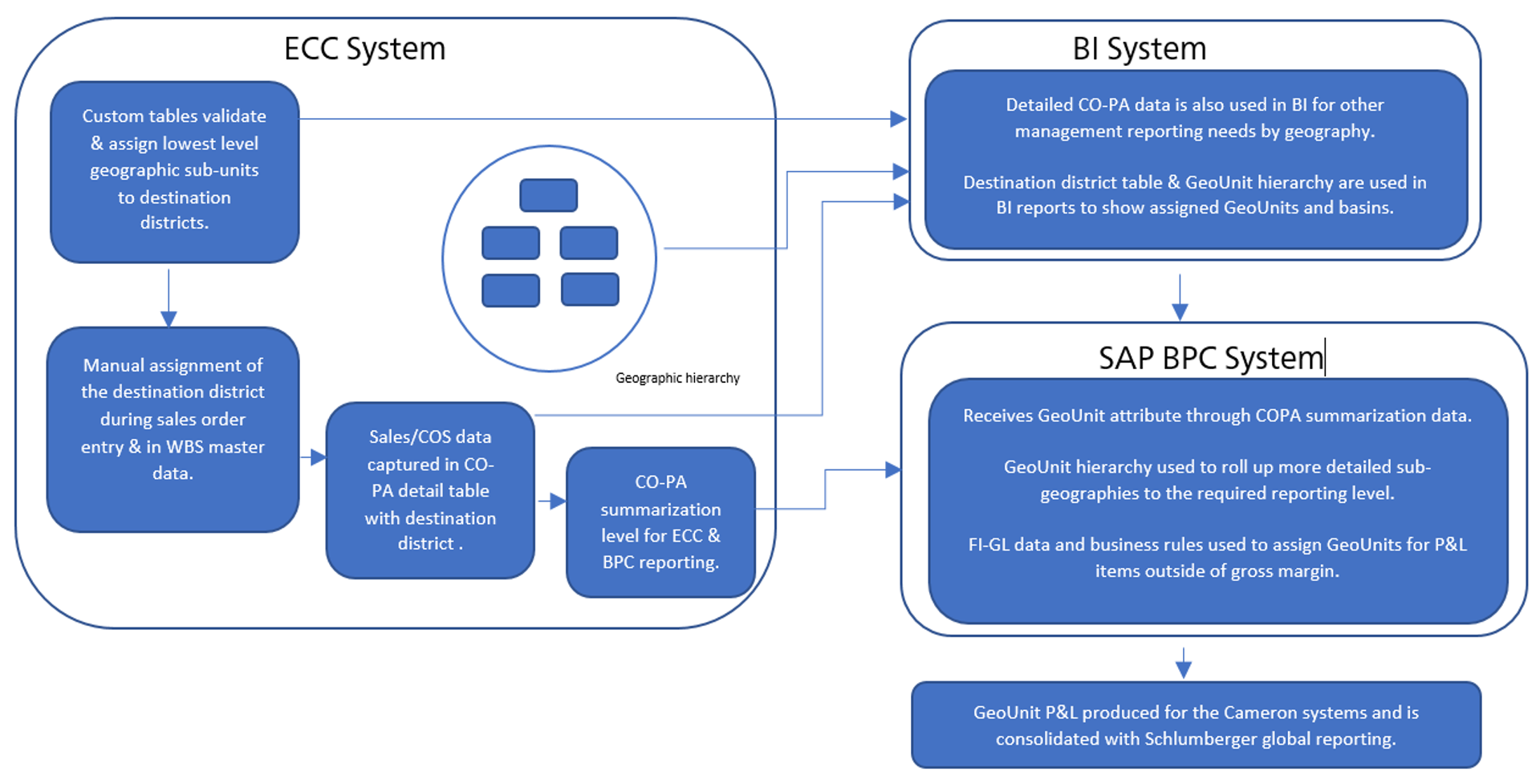 Here is an excerpt of an SAP custom table used to assign the lowest level Schlumberger geographic unit to the designation district as well as to the GeoUnit hierarchy.

Here’s an idea of data from the CO-PA summarization level table combined with GeoUnit hierarchy parents for SAP ECC reporting and for extraction to SAP BPC.

The most significant benefit of this technical approach is that it permitted the already-in-place business processes and core SAP and SAP BPC design that had been in place for nearly 12 years not to require significant changes. The approach resulted in cost avoidance of millions as the solution was delivered for under $0.3M USD of IT implementation costs. This approach enabled the legacy Cameron business lines to quickly adapt to the Schlumberger geographical reporting requirements back in 2016 at the time of acquisition.

This proved especially helpful in 2020, when, in reaction to the market dynamics related to the onset of COVID, and the downturn in the energy business that occurred in 2020, Schlumberger reacted by consolidating its GeoUnits to align with the new way of working. The reporting structure was consolidated into five global basins with 30 GeoUnits under the basins. With limited time to respond, the underlying enterprise system (SAP) and other supporting business applications were expected to undergo application changes to align with the new organizational structure for financial and management reporting without significant expenditures and minimal notice (1-3 months). Because of the work we had put in four years earlier, Schlumberger was able to very quickly align GeoUnits into these basins. 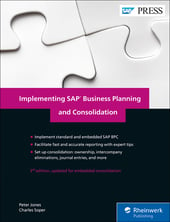 END_OF_DOCUMENT_TOKEN_TO_BE_REPLACED

by Mathew Abraham and Karla Beehler

Mathew Abraham is employed with Schlumberger, a leading oil & gas service industry, as the IT finance manager for SAP BPC. In his role, Mathew manages an SAP team and engages with business financial hubs across 85 countries. He has more than 15 years of ERP experience across different industries and functions, including M&A, legal entity consolidations/divestitures, financial reporting structural reorganizations, and integrating various non-SAP applications and reporting platforms. Mathew has a financial certification from Harvard university and a master's in business administration from Texas A&M. Karla Beehler has 39 years of IT experience with a focus on IBM systems, SAP solutions, and other custom software. Karla has spent more than 25 years in the SAP space, working for SAP itself and as a consultant in the FI/CO and SD application areas. She has SAP industry experience in manufacturing, engineering & construction, chemicals, shipbuilding, distribution, telecommunications, mining, and professional services.

END_OF_DOCUMENT_TOKEN_TO_BE_REPLACED

END_OF_DOCUMENT_TOKEN_TO_BE_REPLACED
Subscribe to our blog!Get notified about future blog updates.