How to Debug a JavaScript Program

One of the aha! moments that contribute significantly to the understanding of programming is the use of a debugger.

With the help of such a debugger, it’s possible to pause a program at a certain point, to go through the following statements step by step, to look at the variable assignments, and much more. Simply put, debuggers are a great way to understand the flow of a program.

Let's take the findDuplicates() function shown below as an example. This function is to output the duplicate entries for the numbers array. However, the function contains a small error that causes each entry to be recognized as duplicate.

The HTML file that embeds the code is shown below. This is also the file you open next in the browser (in Chrome, for example) to debug the JavaScript code there.

To open the debugging section of CDT, select View > Developer > JavaScript Console, and then go to the Sources tab. On the left side, you’ll see (among other things) the JavaScript source code file that is embedded in the called HTML file. Double-click this file (main.js) to select it and open it in the built-in editor.

This view can now be used to define breakpoints at which the execution of the program is to be stopped. Such breakpoints enable the developer to jump into a program at a certain point in time and execute the following statements step by step, starting at the breakpoint.

When you subsequently reload the HTML file in the browser, the program stops exactly at the defined breakpoint. 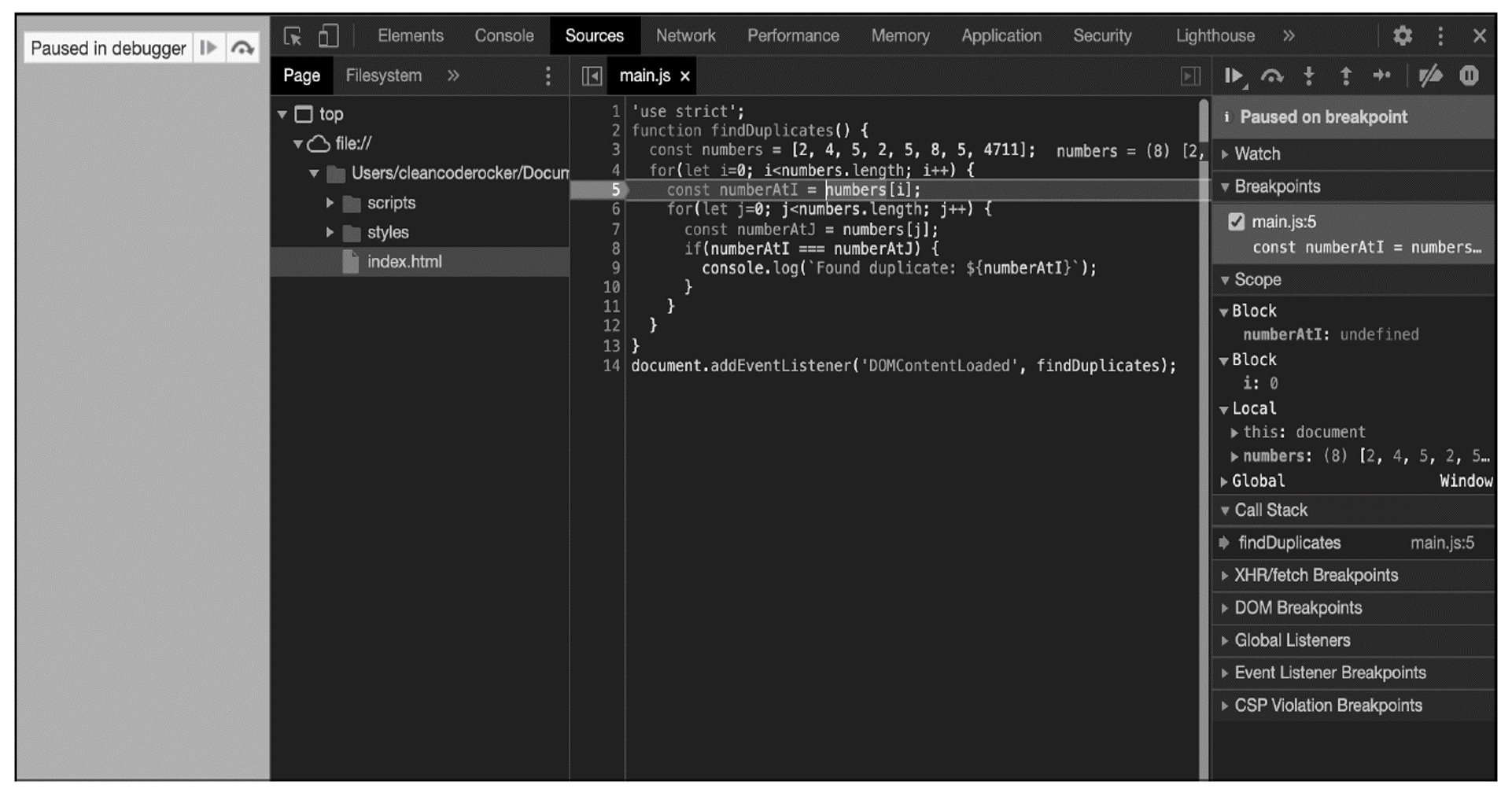 The keyword is part of the language and thus independent of the debugging tool used (there are others besides CDT, but we won’t discuss them here).

Once the program has been stopped, you can view the variable assignments—that is, the current values of the visible variables. These can be found in the Sources view on the right side under the Scope tab (see next figure). In the example, you can see that the numberAtI variable still has the value undefined (after all, the line where the program is stopped hasn’t been executed yet), and the i variable has a value of 0.

Running a Program Step by Step

Using the navigation (on the top-right side), you also have the option to execute the source code manually step by step or statement by statement. The exact meanings of the different buttons are summarized in this table.

If you now click the button to execute the next statement from the breakpoint defined earlier, the const numberAtI = numbers[i] statement is executed, assigning the numberAtI variable a value of 2.

If you now execute the statements up to line 7 (next figure), you will be able to see straightaway where the error is in the program. The inner counting loop compares each element of the array (in the numberAtJ variable) with the current element of the outer loop (in the numberAtI variable), which means that each element—that is, each number— is also compared with itself. 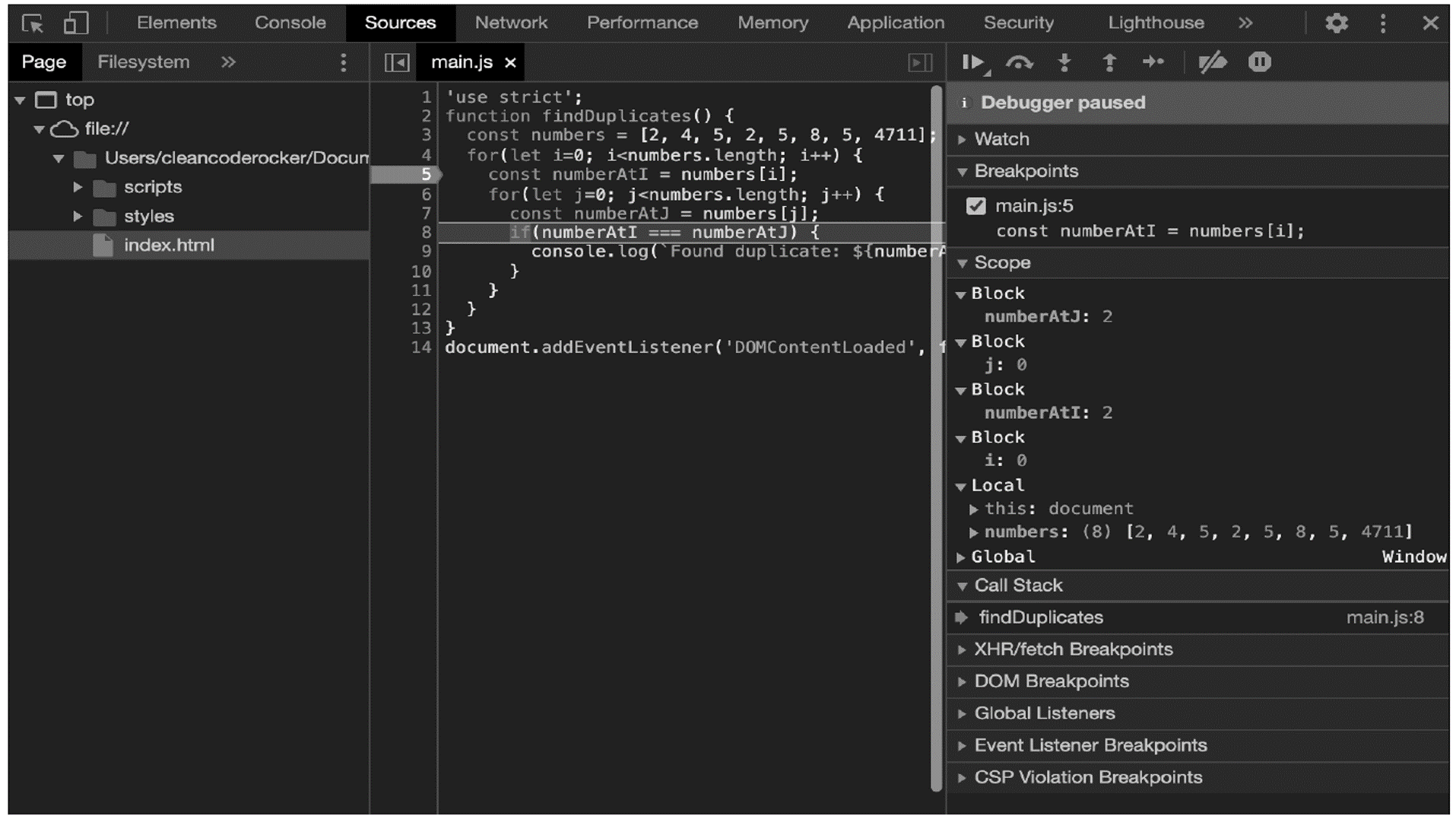 Of course, there is no reason that you shouldn't define several breakpoints within a program. You can then use the Continue button to "jump" to the next breakpoint occurring in the program flow. 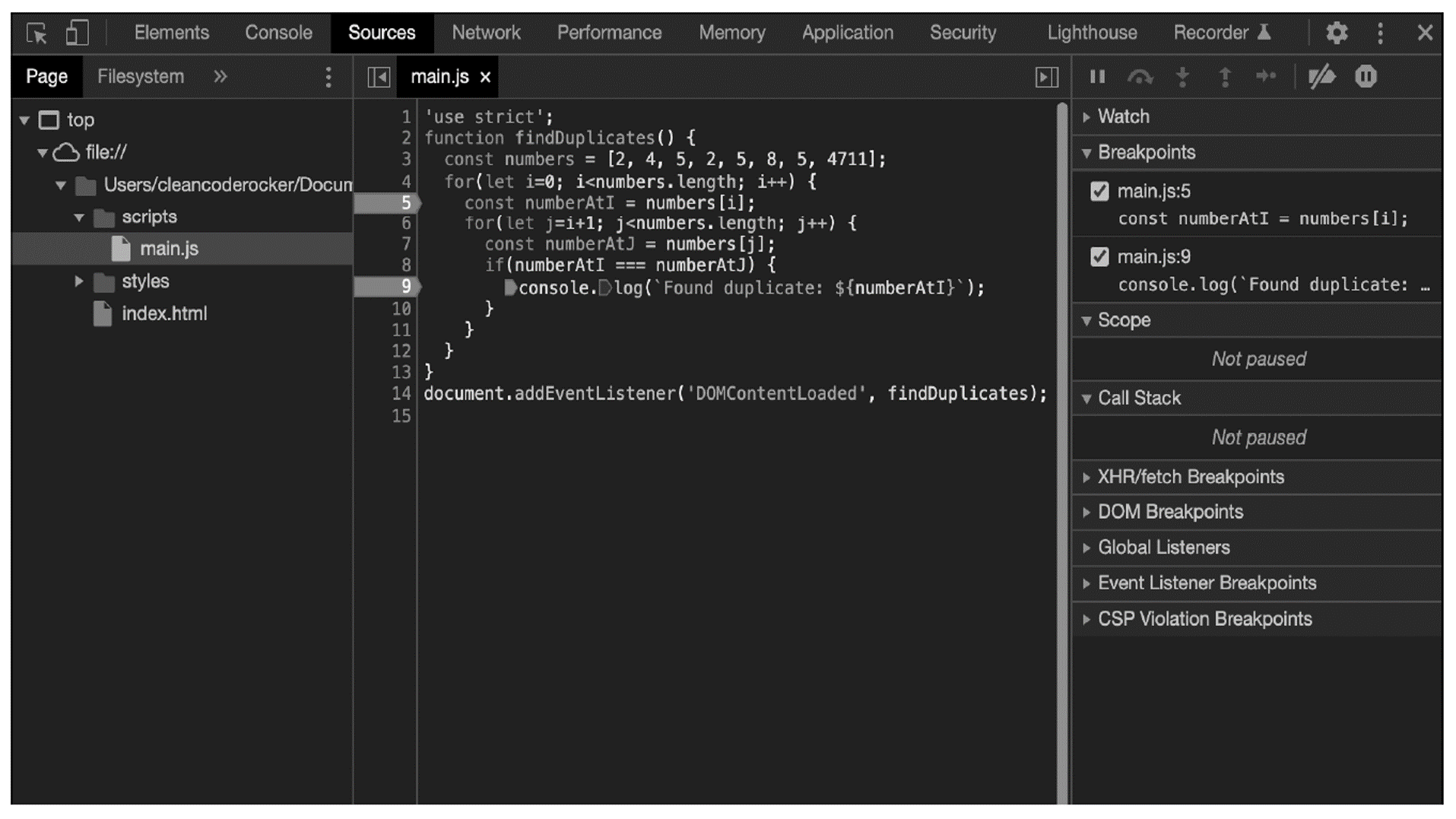 Other Types of Breakpoints

Besides "normal" breakpoints, where a program stops whenever the corresponding line of code is reached, there are other types of breakpoints:

In addition to the variable assignment, you can also display the function call stack. The best way to illustrate this is to change the code example from earlier to call multiple functions.

In the code below, some of the logic from the findDuplicates() function has been moved to new functions: the contents of the outer loop are now in the checkNumber() function, which is called with the current number as the first argument and the entire array as the second argument.

Editor’s note: This post has been adapted from a section of the book JavaScript: The Comprehensive Guide by Philip Ackermann.

Begin your JavaScript journey with this comprehensive, hands-on guide. You’ll learn everything there is to know about professional JavaScript programming, from core language concepts to essential client-side tasks. Build dynamic web applications with step-by-step instructions and expand your knowledge by exploring server-side development and mobile development. Work with advanced language features, write clean and efficient code, and much more!

END_OF_DOCUMENT_TOKEN_TO_BE_REPLACED

END_OF_DOCUMENT_TOKEN_TO_BE_REPLACED
Subscribe to our blog!Get notified about future blog updates.