In this case study, we’ll take a look at E-Corporation, which has recently implemented an analytic solution within the SAP HANA platform.

The company has provisioned tables; loaded data with an extract, transform, and load (ETL) tool; and created a series of SAP HANA information views. The user community will primarily interact with the SAP HANA information views, which will be secured with an analytic privilege that limits data access by region. Each user will have her own logon to the SAP HANA system to accommodate the data security requirements. However, users will primarily access the data via SAP BusinessObjects Business Intelligence (BI). The SAP BusinessObjects BI system has been configured to support single sign-on (SSO) for the SAP HANA platform with Security Assertion Markup Language (SAML) authentication.

E-Corporation has contacted its lead SAP HANA security consultant and requested help in defining a security model to accommodate its security requirements. The consultant has determined that a series of repository roles will need to be defined. Let’s look further at the consultant’s decision-making process and the four repository roles recommended for this project.

The first repository role will provide a base level of access to SAP HANA information views. The name of the repository role will be consumer. This role will grant SELECT and EXECUTE access to the _SYS_BI schema, which is required because additional metadata is published to this schema. The role will also grant SELECT access to the design time calculation view e-corp.sales.models::SCV_CUSTOMER_SALES. Users will need to have SELECT access, at a minimum, to query the information views and metadata in the _SYS_BIC schema.

When you reference the design-time calculation view in the repository role, the system will automatically grant access to its corresponding column view in the _SYS_BIC schema. An analytic privilege will also be granted. The analytic privileges will limit the consumer’s access to a series of information views and will dynamically filter the results of the views so that each user will be limited to one or more sales regions based on his predetermined security profile.

The figure below shows the configuration of the consumer repository role script, which in our example, contains two catalog schema privileges and one analytic privilege.

In addition to the standard users at E-Corporation, a small group of power users require unique permissions. These users need access the SAP HANA Web-Based Development Workbench to query information views and tables for debugging purposes. They’ll also need to access the SAP HANA packages to view the design-time versions of the SAP HANA information views. Therefore, they’ll need basic access to the SAP HANA repository. To accommodate this requirement, the security consultant recommends that an additional repository role named poweruser be created.

Below shows the configuration of the poweruser repository role script, which contains all the privileges necessary to accommodate the security requirements.

The developers at E-Corporation will require access to SAP HANA and the SAP HANA Web-Based Development Workbench. These users will be responsible for creating the development artifacts used by the analytic solution. At a high level, developers require the following privileges and accesses: 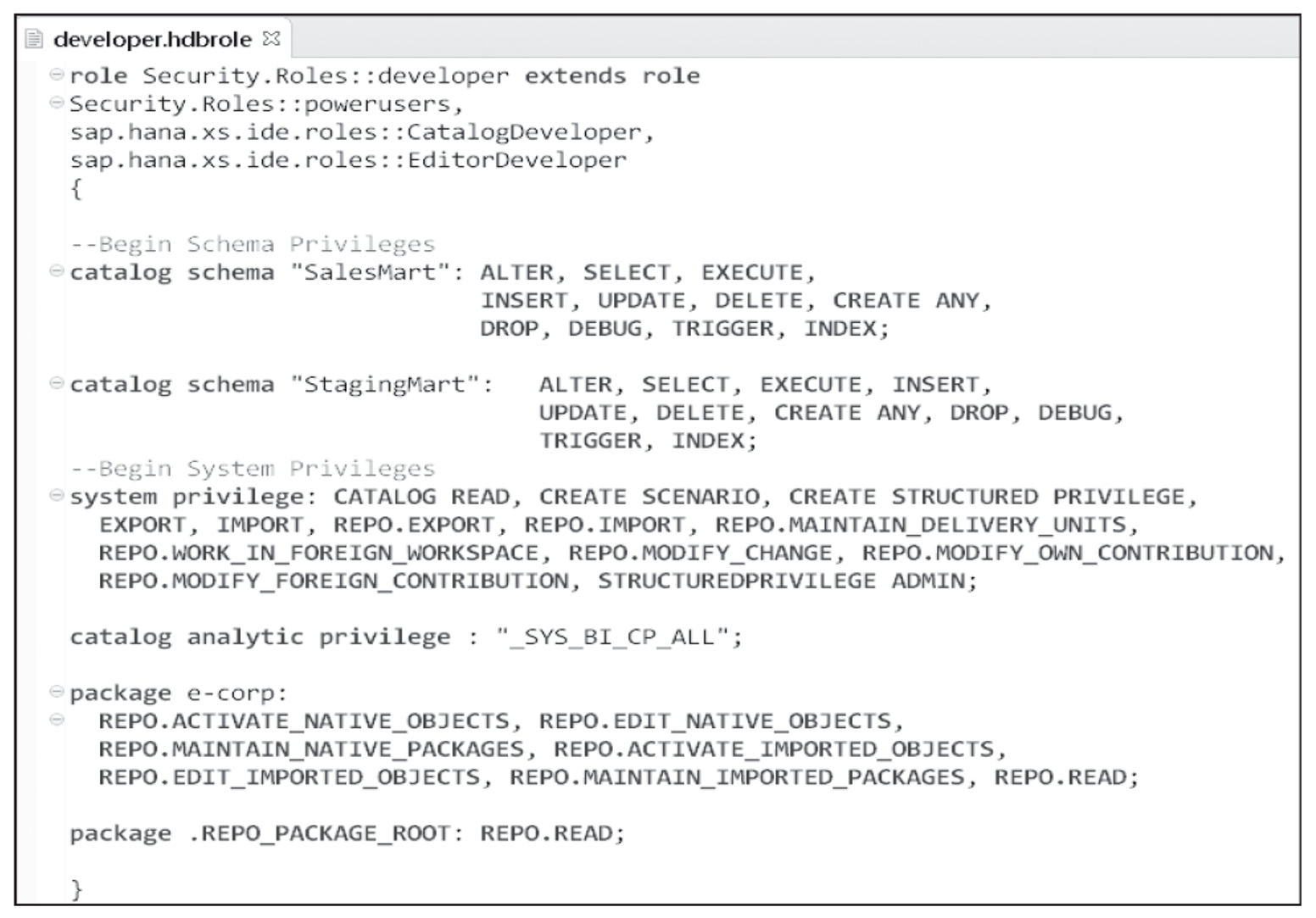 Let’s look at how the developer repository role script shown above fulfills the requirements:

As you can see, developer requirements can be fulfilled by including a few existing roles and by specifying several specific privileges. Referencing existing roles is helpful by reducing redundancy within custom repository roles. These references also ensure that the developer role will inherit the same privileges as the lower-level power user and consumer roles. Two of the existing repository roles also provided application privileges specific to the SAP HANA Web-Based Development Workbench. 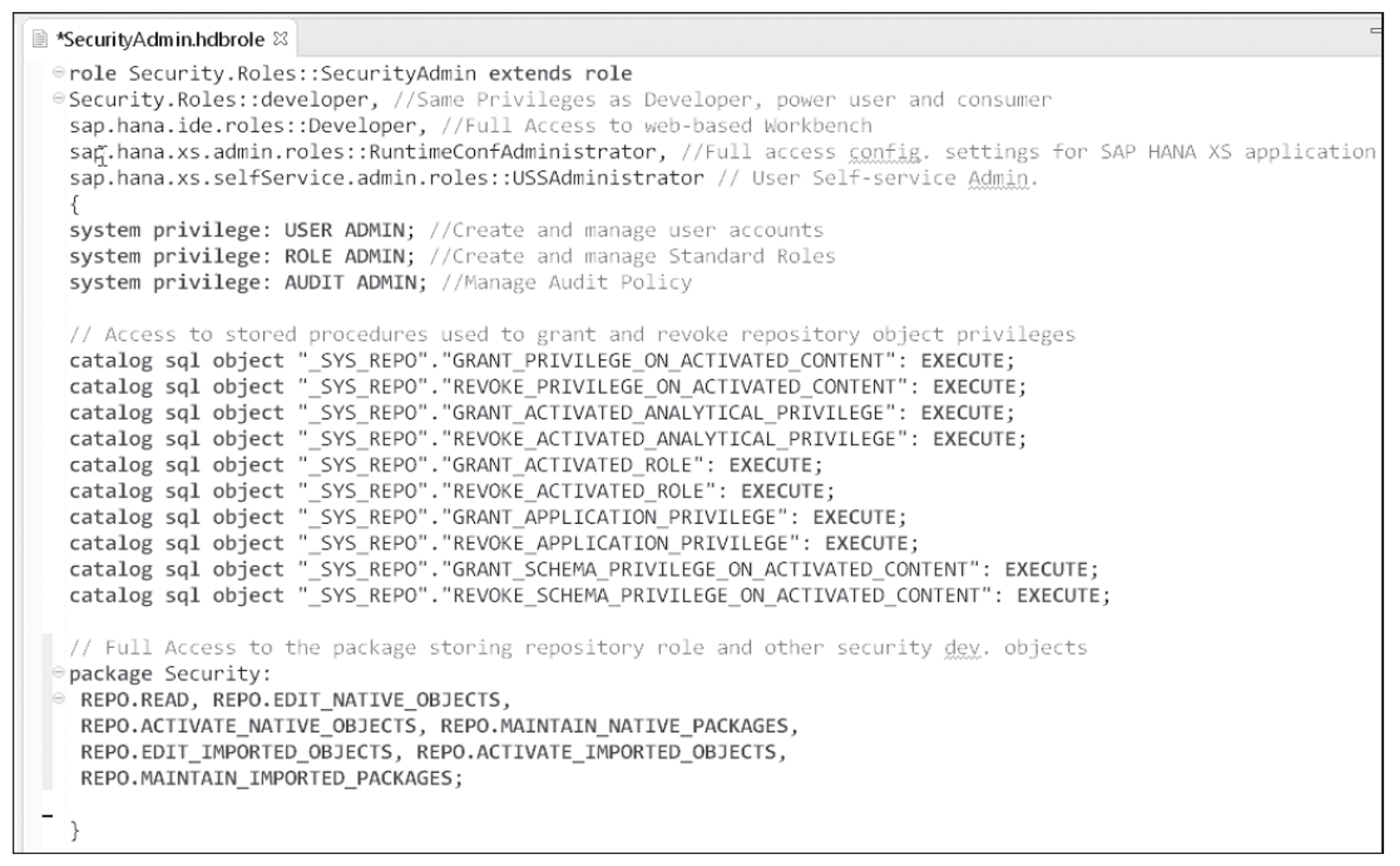 As described in the comments within the script, the security administrator role is an extension of the developer role and three additional XS engine application-specific roles. The applications in the XS engine provide interfaces useful in managing a security model. Three additional system privilege lines are included to grant user, role, and audit management. The catalog sql object lines grant EXECUTE privileges for a series of stored procedures necessary to grant and revoke privileges for objects owned by _SYS_REPO. Finally, the package security lines are included to provide exclusive access to the top-level package that will be used to store security-related development artifacts.

Once the repository roles are activated and assigned to the appropriate users, E-Corporation will have the makings of a sound security model. Because the company used repository roles, the model can easily be transported to other systems and managed using lifecycle management best practices. In addition, the _SYS_REPO system account will be the primary owner and grantor of the privileges.

To learn more about granting object privileges with repository roles, check out this post.

Editor’s note: This post has been adapted from a section of the book SAP HANA 2.0 Security Guide by Jonathan Haun.

Your complete guide to safeguarding your SAP HANA 2.0 platform awaits! Get step-by-step instructions for configuring and maintaining each security element, from the new SAP HANA cockpit to privileges and roles. Learn how to secure database objects and provision and maintain user accounts. Then, dive into managing authentications, certificates, audits, and traces.

END_OF_DOCUMENT_TOKEN_TO_BE_REPLACED

Tools for the SAP HANA Administrator

END_OF_DOCUMENT_TOKEN_TO_BE_REPLACED

Why Should You Protect an SAP HANA System?

END_OF_DOCUMENT_TOKEN_TO_BE_REPLACED
Subscribe to our blog!Get notified about future blog updates.