In this blog post, we want to illustrate the evolution of controlling in SAP S/4HANA.

The functional and architectural effects should be easy to understand based on the evolutionary steps. Our guiding principles are the simplification of the processes and the gain in transparency and analysis options.

As an example, let’s consider the SAP S/4HANA implementation project at a company. In a first step, you post costs to the implementation project by time confirmation. Because the project is billable, you apply revenue recognition to get the matching realized revenue and the WIP/accrued revenue. The goal in this example is to have the results of the revenue recognition available in the general ledger and a margin on the project and the associated market segment (here the customer and the product, which is the SAP S/4HANA implementation) can be shown.

Now let’s look at the processes that got us started: the SAP ERP functionality, as shown in this figure. 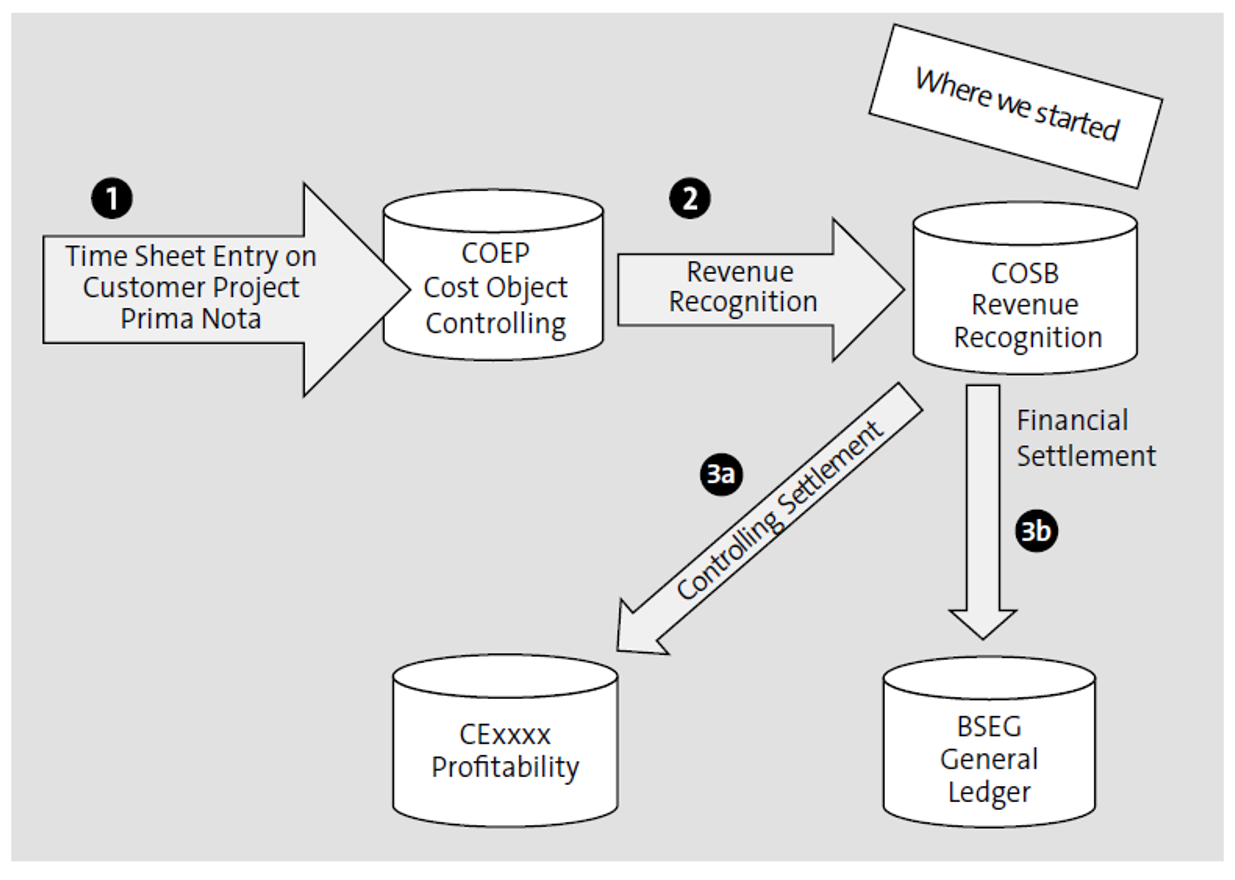 You can see that each process step has its own database per application, which meet different requirements. The time recording is initially only persisted in the controlling table, so the costs are visible for the project. At the end of the period, there is a results analysis run, which determines the matching revenue and the WIP. The result is stored in separate results analysis tables. Another periodic job is started: the settlement. It consists of two parts: the settlement to the general ledger, to update the balance sheet and income statement, and the settlement to costing-based profitability analysis to provide the costs and revenues for the market segments involved.

With this setup, you face the following challenges:

With the introduction of SAP S/4HANA Finance, you get the general ledger, controlling, and margin analysis integrated in one database: a first simplification. Results analysis is still an application that the Universal Journal does not include. Thus, there is still a settlement required to update the other applications. The figure below provides our example with specific amounts. 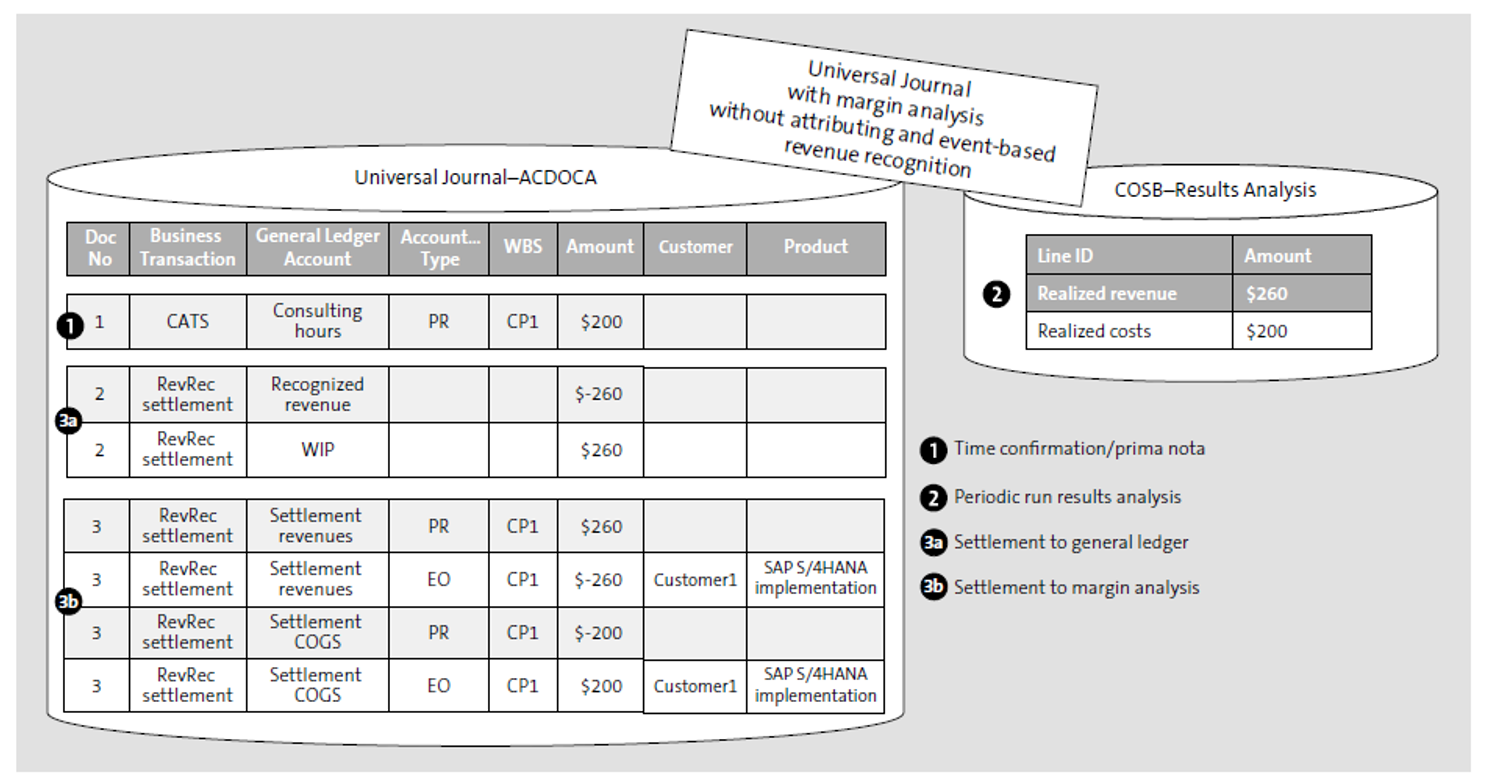 In step 1, the time recording is now persisted in the Universal Journal and thus in the general ledger. The project reporting can be done based on Universal Journal. We still need the periodic runs. In step 2, the result analysis still stores the realized revenue, matching it to the posted costs, and the WIP in separate results analysis tables.

The settlement now posts in the Universal Journal in step 3. In step , there is a settlement with document 2 to the general ledger, to update the balance sheet and income statement. In step , you post document 3, which credits the project and debits the profitability segment. The first two lines settle the realized revenue; the next two line items settle the costs.

Margin analysis is now done in the Universal Journal. When you start a report for the SAP S/4HANA implementation project, you’ll see two line items:

And with the aggregation, you get a margin of $60.

This is a first step to bringing the applications together and running them on one data model. But to further simplify, to provide data in real time and to improve the analysis capabilities, there are two additional features: event-based revenue recognition and attribution of the market segments.

The next figure shows how the preceding example is reflected in the system with the new cost management approach.

This is a dramatic simplification. The event-based revenue recognition is triggered by the cost posting. This immediately posts the realized revenue and the WIP. The legal general ledger reporting is up to date with the cost entry.

The leads to the following benefits:

Using this example, we want to draw your attention to another innovation: it’s now possible to store several controlling objects on one journal entry item. So, depending on the business process, the system can enrich journal entry items and derive additional account assignment information. We make a distinction between the following:

Editor’s note: This post has been adapted from a section of the book Controlling with SAP S/4HANA: Business User Guide by Janet Salmon and Stefan Walz. 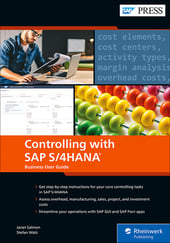 SAP S/4HANA brings change to your routine controlling activities. Perform your key tasks in the new environment with this user guide! Get click-by-click instructions for your daily and monthly overhead controlling tasks, and then dive deeper into processes such as make-to-stock and make-to-order scenarios, margin analysis, and investment management. Finally, instructions for intercompany transactions and reporting make this your all-in-one resource!

END_OF_DOCUMENT_TOKEN_TO_BE_REPLACED

END_OF_DOCUMENT_TOKEN_TO_BE_REPLACED
Subscribe to our blog!Get notified about future blog updates.