An Overview of SAP GTS Reporting with SAP BW/4HANA

As a data warehouse, the main task of SAP BW/4HANA is to harmonize and structure data from multiple sources and systems into data models. It can handle data from SAP and non-SAP feeder systems in both persistent and nonpersistent ways, meaning that not all data that SAP BW/4HANA can leverage needs to be stored in the database. After the data is ready for consumption, SAP BW/4HANA allows for fast and dynamic reporting using the underlying data.

The general architecture of a data model is based on the Layered and Scalable Architecture ++ (LSA++) from SAP. This architecture prescribes a general way of working that consists of mandatory and optional layers. The goal is to have a flexible architecture that is scalable but also reusable to keep the total cost of ownership (TCO) to a minimum.

The Virtualization layer is the only mandatory layer, and, as the name states, it doesn’t persist any data in the database. It also allows access to all of the layers beneath it. The reason behind this is to maintain a flexible approach. All the data that is needed for analytical reporting is consumed through this Virtualization layer.

If anything would happen to the underlying data model or any of the other layers would change or disappear, then the reports built on top of the Virtualization layer would not be impacted and would not have to be reworked to cope with these changes.

All other layers in the LSA++ architecture are optional. It’s important to note that optional doesn’t mean unnecessary; it means that any of these layers have their use and advantages in a data warehouse approach, but that you have the freedom on how to tackle each data model that has to be developed.

To make use of SAP GTS data for analytical reporting, you need to integrate SAP GTS with SAP BW/4HANA first. Assuming that a few prerequisites are met, the integration between SAP GTS and SAP BW/4HANA is standard.

The following figure shows the integration between SAP GTS and SAP BW/4HANA. As previously mentioned, SAP BW/4HANA can leverage data from both SAP and non-SAP systems.

The objects that enable data to be available for use in SAP BW/4HANA are called data sources. Data sources can make use of different technologies to extract data or virtualize data to SAP BW/4HANA. The following are the most common methods:

Our main focus is related to the first method: from SAP GTS to SAP BW/4HANA. In other words, you’ll learn more about extraction of the SAP GTS environment into SAP BW/4HANA. The reason for this focus is that currently this is the most efficient way to leverage data maintained in SAP GTS.

Note: The other methods (i.e., SAP HANA views and CDS views) can also play an important role, but as the provided content for SAP GTS doesn’t suit all scenarios, data extraction to the data warehouse is still highly recommended. One advantage to keep in mind is that any SAP HANA views or CDS views (i.e., that you would use or create for operational reporting) can also be used to create a data source for your data warehouse.

Before going into detail for this method (i.e., data extraction from SAP GTS to SAP BW/4HANA), we’ll summarize the approach. First, in this method, the SAP BW/4HANA system fetches the changed (delta) information from the data sources on a regular basis and combines the data from multiple SAP GTS tables to transform them into a specific format.

As many SAP GTS tables contain globally unique identifiers (GUIDs) as unique keys, it’s advisable to make sure that the extractors don’t forward this information to your SAP BW/4HANA system to keep complexity and storage costs to a minimum.

After the data extraction is finalized and available in SAP BW/4HANA, the data can be transformed and enhanced based on the needed requirements for the analytics reporting. After this activity is completed, master data and transactional data is accessible in SAP BW/4HANA and allows for multidimensional analyses from various business perspectives. For example, you can access consolidated data from different modules (i.e., SAP GTS, SAP S/4HANA, etc.) via a single report.

The following sections cover more details on the extraction of data from SAP GTS.

InfoSources contain a number of key figures. These key figures are numeric values or quantities (e.g., net price or quantity) used in the output reports as objects for analysis. Each of the three standard InfoSources also comes with a number of standard queries. Queries relate to actual reports and specify which data is leveraged.

The first standard InfoSource (0SLL_CD_1) relates to customs documents and consists of data from documents created in SAP GTS. Customs documents should be interpreted here in a broad sense, including import and export declarations as well as documents for transit or other procedures.

The standard reports run for this functional area relate to the following key figures:

In this customs area, three sorts of standard queries are available:

The first query runs an analysis of the total number of imported/exported items (e.g., by customs value, net price) per FTO, legal unit, customs procedure, or tariff code. The second query results in the same report per product number, and the third query provides the report per departure/destination country.

The Legal Control InfoSource key figures include the following:

Analogous to standard SAP GTS reporting, queries launch a selection screen that you can use as a filtering tool. Below shows the selection screen for running the Export Analysis per Country query. 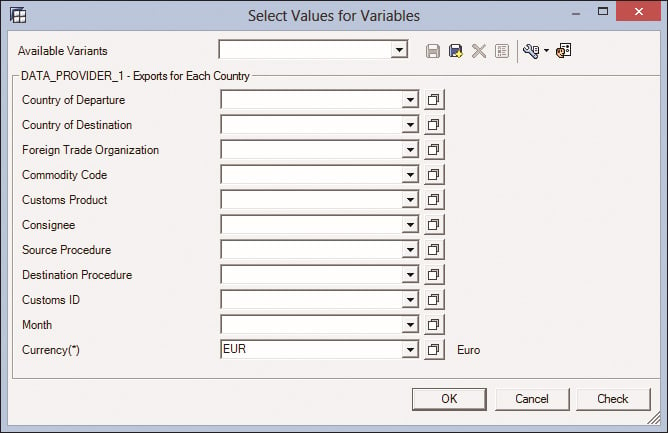 For this example, we used the BEx Analyzer to visualize the report. The BEx Analyzer is an analysis and reporting tool of SAP Business Explorer (SAP BEx), which can be embedded in Excel.

The next figure shows a sample output of running the query. The report lists the export analysis per Country of Departure. You can analyze key figures such as the net price, gross weight, and net weight per country of departure, per consignee, and so on. 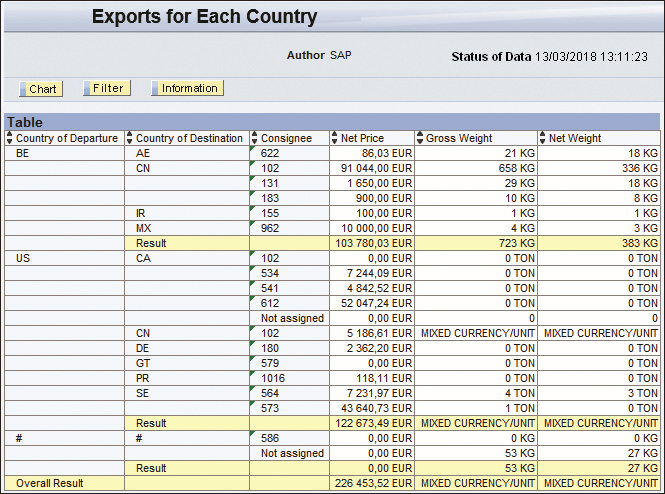 The strength of the SAP BW/4HANA reports lies in its customizable and versatile nature. Analysts can continuously change the report by adding or removing variables, inserting KPI metrics, and so on to help analyze large sets of data to make valid conclusions and support business decisions (e.g., operational and management reporting).

You can apply SAP BW/4HANA content in three ways:

The third InfoSource (0SLL_CD_3) relates to information concerning closing portions for the processing of customs procedures with economic impact (e.g., BWH). We won’t elaborate further on this as a similar logic as in the previously discussed InfoSources applies.

To sum up how SAP BW/4HANA works alongside SAP GTS reporting, here are several advantages:

To make reports fit our business needs better, customized reporting can be continuously adapted by adding and removing variables, inserting filters, and so on. As such, valuable data may be filtered and extracted from large sets of transactional data.

SAP BW/4HANA content contains a range of objects that simplify the implementation of a SAP BW/4HANA system and speed up the construction of an effective reporting system.

Because you use SAP BW/4HANA, you can combine data from various systems (i.e., SAP or non-SAP) into a single report. For example, this makes data extraction from multiple systems to a spreadsheet for further analysis redundant because data from SAP and non-SAP systems may be imported in SAP BW/4HANA.

Editor’s note: This post has been adapted from a section of the book Implementing SAP Global Trade Services by Yannick Jacques, Nick Moris, Chris Halloran, and Pablo Lecoury. 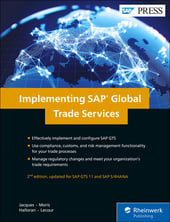 Don’t get tied up in global trade red tape! Navigate the complex web of regulations with this guide to implementing SAP Global Trade Services. Learn the ins and outs of SAP GTS and how it connects to SAP ERP and SAP S/4HANA. Get step-by-step instructions to configuring compliance, customs, and risk management functionality, and explore your reporting options. Get insight into global trade innovations, in SAP GTS 11 and beyond!

END_OF_DOCUMENT_TOKEN_TO_BE_REPLACED

END_OF_DOCUMENT_TOKEN_TO_BE_REPLACED
Subscribe to our blog!Get notified about future blog updates.