An Overview of EWM with SAP S/4HANA: Embedded, Decentralized, and Stock Room Management 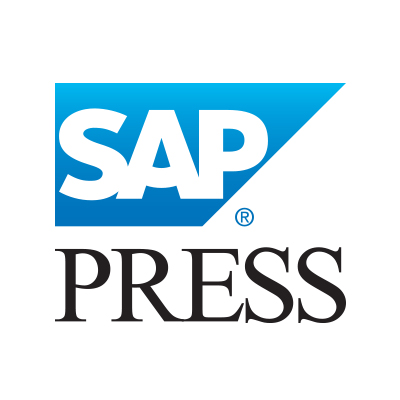 SAP Extended Warehouse Management (EWM) is one of the leading warehousing applications available worldwide for enterprises both large and small in size.

SAP EWM first emerged as a successor to SAP Logistics Execution Warehouse Management (LE-WM), with added advantages and advanced features such as material flow system (MFS) and Labor Management. The earliest versions of SAP EWM were only available as separate, “standalone” applications until 2016 when SAP embedded the EWM functionality in the SAP S/4HANA suite.

By embedding EWM on SAP S/4HANA, clients could take advantage of the SAP HANA in-memory database and execute high-speed transactions for their warehousing operations. With each new version of SAP S/4HANA, more functionality was added to embedded EWM, including an ever-growing list of innovative SAP Fiori apps and a stripped-down version called stock room management.

With the latest version of SAP S/4HANA, 1909, there are many questions as to what one can do for their warehousing landscapes. Our book, Warehouse Management with SAP S/4HANA, covers both business and technical processes for embedded and decentralized EWM for version 1909.

Embedded EWM was released in SAP S/4HANA 1610 to allow customers to take advantage of the higher processing power of SAP HANA and lower the total cost of ownership compared to using standalone or decentralized EWM. As it currently stands, basic embedded EWM functionality is available to anyone with an SAP S/4HANA license, with advanced features available via an additional license.

Clients may choose embedded EWM for a host of reasons. For small- to mid-size customers, the basic functionality may be enough for their needs. For those with more advanced needs, the application of functionality to their specific business processes should be considered when choosing a license. But no matter which option is picked, those running embedded EWM benefit from ease of deployment and the lowered total cost of ownership. Why? Because they only need to maintain and use a single physical system rather than multiple physical systems as in case of standalone EWM.

A good number of embedded EWM implementations have already been done and clients have been happy with the outcome. Benefits listed by these clients include reduction in master data duplication, removal of additional transactional documents, and the use of advanced SAP Fiori apps available out of box.

After SAP launched embedded EWM in SAP S/4HANA 1610, there were a lot of customers who realized that they wanted to use their existing systems but also embedded EWM features in another SAP S/4HANA physical server. The reasoning was this would ensure higher performance levels and warehouse business process continuity in case of any downtime.

The deployment option and process flow differences between centralized and decentralized EWM on SAP S/4HANA are shown in figure below: 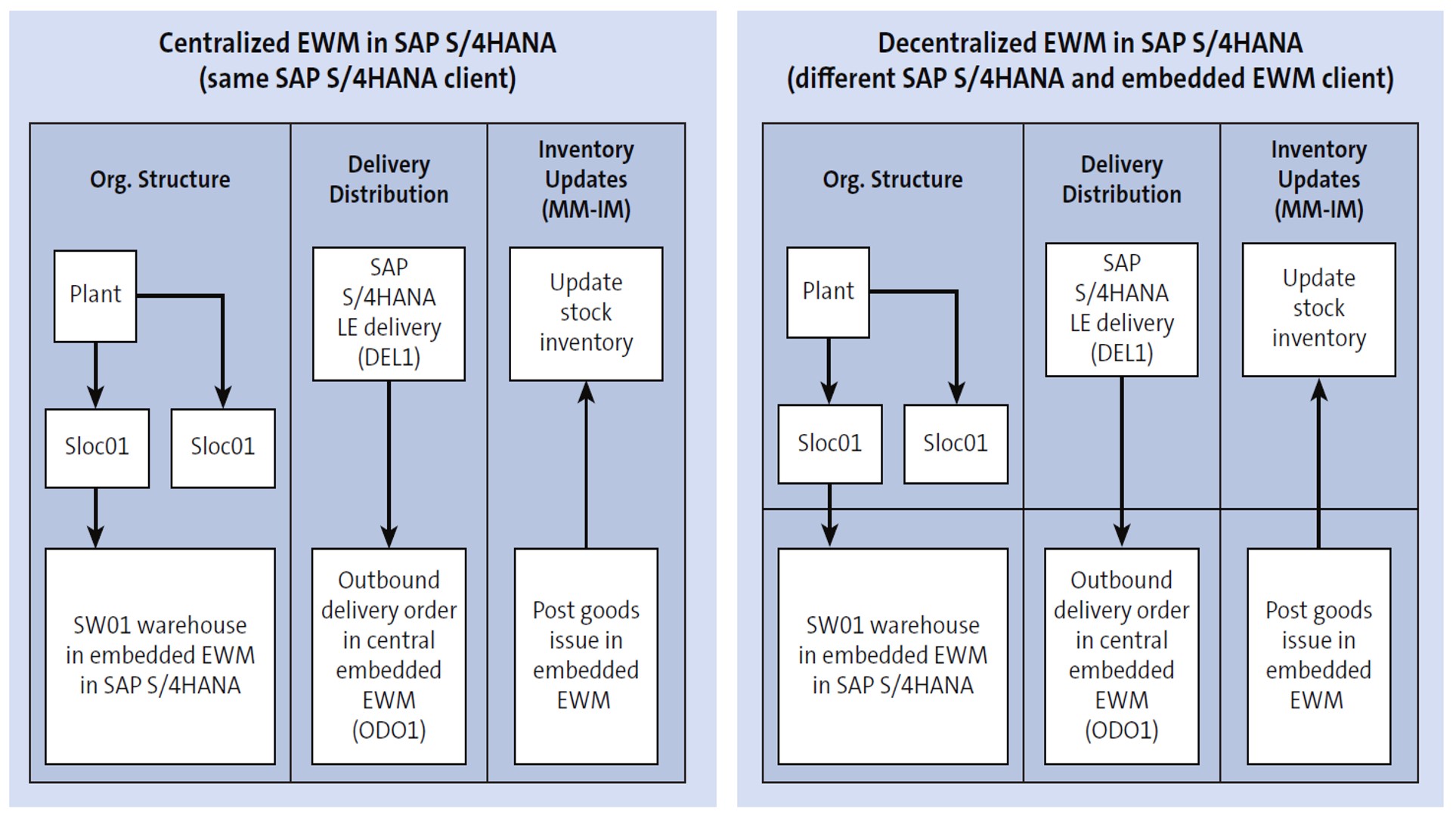 For more information on decentralized EWM on SAP S/4HANA, refer to the “What’s New Viewer - SAP S/4HANA” page. Details on how the customization can be done for this landscape can be explored using SAP Note 2775345.

In SAP S/4HANA 1909, SAP released a third deployment option for WM customers who do not use warehouse processes extensively, do not need advanced functionality found in SAP EWM, and would like to continue using the basic warehouse processes found in their existing SAP LE-WM applications. Called stock room management, this deployment allows customers to upgrade to SAP S/4HANA without performing a full-fledged WM transformation.

The various features of WM in SAP S/4HANA which can be utilized under stock room management exist in a number of groups: inventory management processes; outbound, inbound, and internal stock movement; physical inventory; and reports for stock data.

With the latest versions of SAP S/4HANA, SAP has provided various warehousing solutions which suit the needs of businesses of different sizes. This blog provided a brief overview of these different warehousing landscapes for clients running SAP S/4HANA. Learn more about logistics with SAP S/4HANA here. 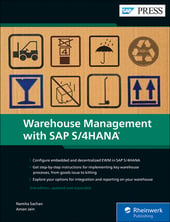 Are you ready for warehouse management in SAP S/4HANA? With this implementation guide to EWM in SAP S/4HANA, lay the foundation by setting up organizational and warehouse structures. Then configure your master data and cross-process settings with step-by-step instructions. Finally, customize your core processes, from inbound and outbound deliveries to value-added services and cartonization. SAP S/4HANA is now ready for you!

END_OF_DOCUMENT_TOKEN_TO_BE_REPLACED

by Namita Sachan and Aman Jain

What Happens During Inbound Processing in SAP S/4HANA Embedded EWM?

END_OF_DOCUMENT_TOKEN_TO_BE_REPLACED

END_OF_DOCUMENT_TOKEN_TO_BE_REPLACED
Subscribe to our blog!Get notified about future blog updates.