There is a certain terminology used in SAP FICO solutions to define inputs into the ledger. One such term is company, an SAP FI enterprise structure that anyone accounting with SAP should know. Let’s take a look at this structure and see how to define it in SAP FI.

A company is the organizational unit in SAP FI for which you can draw individual financial statements, according to the legal requirements of the country where it’s incorporated. You can designate legally dependent branches as companies and join them together as legal units by consolidation. We recommend using the SAP-supplied default company, G00000, if you need only one company.

Arranged just below the client, a company includes one or more company codes. If a company consists of more than one company code, all company codes need to be assigned with the same operative chart of accounts and fiscal year variant (FYV) even though they can have different local currencies for the day-to-day transactions.

For this post, we’ll use the following case study, concerning the Mercury project team. BellSmith (BS), a leading corporation headquartered in the United States, is in the business of manufacturing and distributing consumer products and transportation systems. The consumer products business for BS is handled by a company called BS Consumer Products (BSCP), established in Sacramento, California. Starting with the manufacturing and distribution of sanitary ware and sanitary fixtures in 1960, BSCP diversified into consumer appliances (in the 1980s) and consumer lighting systems (in the 1990s).

Not content with the related diversification in the consumer products business, BS acquired the East-West Transportation Services (EWTS; later renamed BSTS) in 1992, to cash in on the boom in the transport sector. BSTS manufactures elevators, escalators, and several brands of diesel engines from the EWTS stable.

The Mercury project team has decided to represent the preceding structure in the SAP system as detailed in the first figure. The two companies, BSCP and BSTS (both in the United States), are denoted as BS1000 and BS2000, respectively.

Now that we have the details of the case study, let’s follow the steps listed next to define the companies required:

On the resulting overview screen, click the New Entries button and maintain the values for the fields. All these values relating to a company are stored in table T880. Let’s look at some of the important fields shown in the next figure: 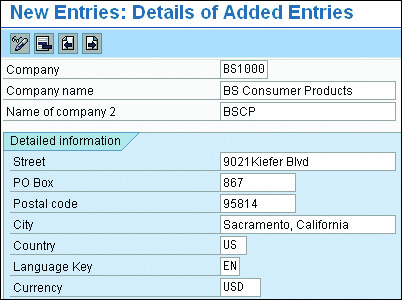 Suppose, for example, that you’ve defined the currency GBP (British pounds) with two decimal places. Now, when you post an amount of GBP 100, this amount is actually stored as GBP 10000 in the currency field in the database. Only during transaction processing does the system (using the currency key GBP) interpret the value as GBP 100.00.

Repeat the steps to create the other company, BSTS (BS2000), and click Save.

When completed, save the details. The company BSCP (BS1000) has now been created as shown in the final figure.

The company unit in SAP FI is an important enterprise structure to know as it allows for easy accounting and lookup of journal entries. This blog post helped provide an overview of this structure and showed you how to define one in SAP FI.

Editor’s note: This post has been adapted from a section of the book Configuring Financial Accounting in SAP ERP by Narayanan Veeriah. 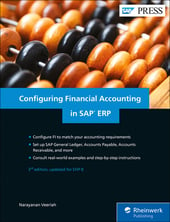 This is your comprehensive guide to configuring Financial Accounting in SAP ERP! Brush up on the old standbys—Accounts Payable, Account Receivable, SAP General Ledger, and Asset Accounting—and then dive in to Contract Accounts Receivable and Payable, Consolidation, Lease Accounting, Travel Management, SAP Fiori, and much more. You’ll learn to set up your enterprise structure, use maintenance tools, and ensure your implementation works for your unique business.

END_OF_DOCUMENT_TOKEN_TO_BE_REPLACED

An Overview of Internal Reconciliation in SAP Business One

END_OF_DOCUMENT_TOKEN_TO_BE_REPLACED

END_OF_DOCUMENT_TOKEN_TO_BE_REPLACED
Subscribe to our blog!Get notified about future blog updates.